The European Champions Cup was true to expectations right to the final, save for one surprise. One, but huge: in the first round the reigning cup holders were eliminated by CSKA (Sofia). The Bulgarians won both legs against Nottingham Forest – 1-0 each match. True, Nottingham Forest were never overwhelming team and already showed signs of reaching the top of their potential and losing interest. True, CSKA dethroned Ajax in 1973 and by 1980 managed to build new strong team after years of uncertainty, lead by young talented coach Asparoukh Nikodimov. But it was great surprise nevertheless: Bulgarian teams never performed well against British teams and Nothingham was the best team in the world at the moment. Reason failed, the underdogs won. 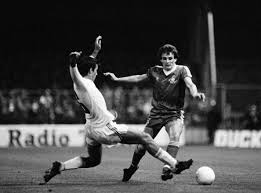 Georgy Iliev (CSKA, in white) tackles Frank Gray – determined Bulgarians won and the days of Nottingham Forest were over. Forever.

The draw was easy on the favourites all the way to the ¼ finals and CSKA was lucky too – they played against Szombierki (Bytom) in the second round. The weakest ever Polish champion was no match and lost both legs. In the ¼ finals CSKA met the second English representative – Liverpool – and this time nothing unusual happened: Liverpool, in perfect form, destroyed the mavericks 5-1 and 1-0. Only Inter (Milan) and Crvena zvezda (Belgrade) was tough pair and after the first leg the Yugoslavian champions seemingly had the edge – they managed a 1-1 tie at the inhospitable Italian ground. In Belgrade Inter won 1-0 and qualified.
No more easy games at the semi-finals: Liverpool vs Bayern and Real Madird vs Inter. All former Champions Cup winners with great ambitions. Real won 2-0 at home and lost only 0-1 away, thus reaching the final for the first time since 1966. Bayern survived in Liverpool – 0-0 – but Liverpool was not giving up: 1-1 in Munich. The away goal qualified Liverpool, may be luckily.
On May 27, 1981 Liverpool and Real Madrid met at Parc de Princes, Paris. In front of over 48 000 spectators, not the greatest crowd attending a final, the opponents had a lot at stake: Liverpool wanted their 3rd Cup – Real Madrid its 7th. Perhaps the pressure was more on the Spaniards – their fantastic dominance in the late 1950s and early 1960s was a heavy burden. The club lost a lot of its aura after 1966 and was desperate to restore its fame as a world football leader. But times changed... the battle was heavy and not very inspiring. 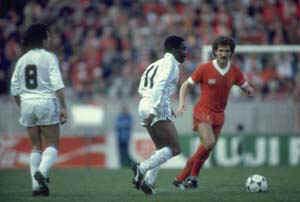 Laurie Cunningham in attack – an Englishman against English team made largely of Scots. 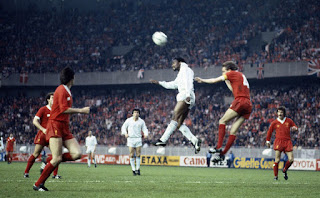 Liverpool defended well, not forgetting to attack. As a whole, they were slightly better, but the strikers were unable to put the ball behind the goalkeepers. 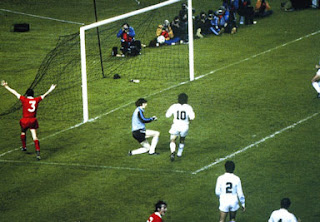 Near the end a goal was scored at last – Alan Kennedy, the left full back of Liverpool, gave the lead to the British in the 82nd minute. And they preserved it to the final whistle. 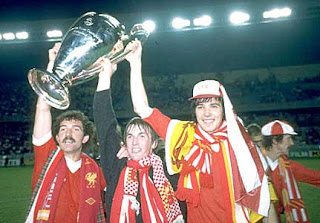 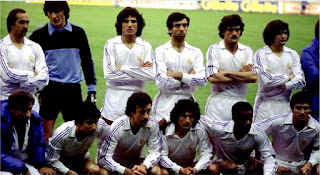 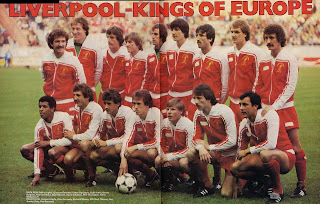 Posted by Vesselin Vesselinov at 12:38 AM 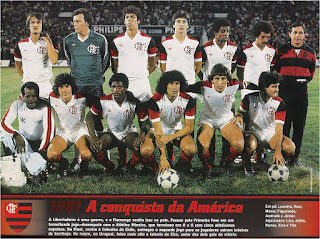 Posted by Vesselin Vesselinov at 12:26 AM

Posted by Vesselin Vesselinov at 4:18 PM 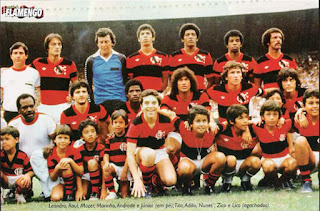 Posted by Vesselin Vesselinov at 12:46 AM 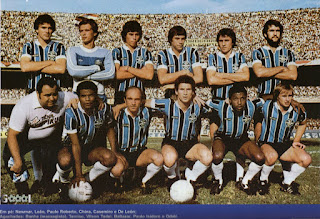 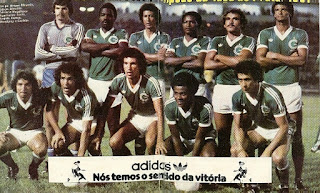 Posted by Vesselin Vesselinov at 12:32 AM 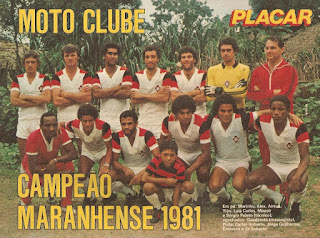 Posted by Vesselin Vesselinov at 1:22 AM 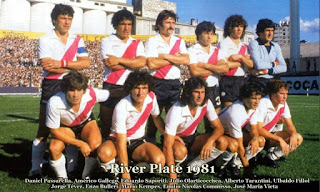 Posted by Vesselin Vesselinov at 5:10 PM

First Division – Campeonato Metropolitano – had one hopeless outsider and two teams competing for the title. Colon (Santa Fe) was the outsider – they finished last with 21 points. Apart from Colon, the struggle for survival was fierce - in the final table 6 points separated 7th from 17th place. 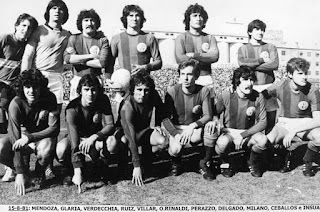 San Lorenzo de Almagro (Buenos Aires) lost the battle by a point and finished 17th with 28 points. Along with Colon, one of the strongest teams in the early 1970s was relegated.
Other clubs in bad shape were: Argentinos Juniors, which without Maradona immediately dropped from title contender to just trying to escape relegation – they finished 16th with 29 points. 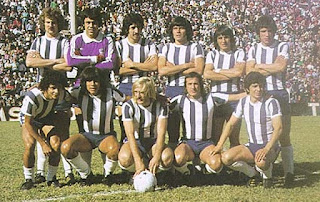 Talleres (Cordoba) finished also with 29 points, but better goal-difference placed the 15th.
Estudiantes (La Plata) were 14th. Velez Sarsfield was 11th. These the clubs in bad shape this year. The opposite way took two teams. 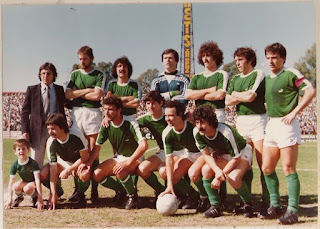 Sarmiento (Junin) finished 13th. Nothing special, at first glance, but they were debutantes and prime candidates for relegation. But the modest newcomers fought to the end and ensured at least one more season among the best.
The second team was a pleasant surprise and, if we move the focus from Maradona, the most interesting thing in Argentine football this year. About them – in a moment. 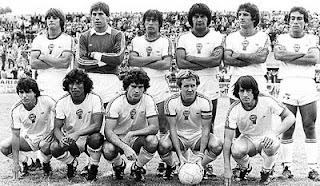 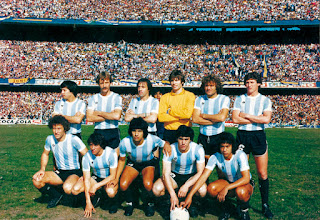 Racing Club had a relatively good season – they finished 5th, ahead of local rivals Independiente. Not a bad squad, but just a promising one at the moment. Hugo Barbas was the veteran star, playing back in Argentina after many years in France, Van Tuyne was the current star player, and Calderon and Olarticoechea were fresh upstarts, still unknown far and wide. Standing from left: Olarticoechea, Van Tuyne, Osvaldo Pérez, Vivalda, Berta, Leroyer.
Crouching: Calderón, Barbas, Villarruel, Carrasco, Muñiz. 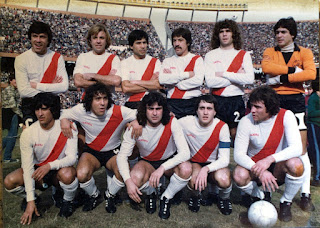 River Plate misfired – full of great names, including Tarantini and Kempes, they finished 4th. A point ahead of Racing, missing 3rd place on goal-difference, and... not at all running for the title. 39 points – the contenders finished with much more. 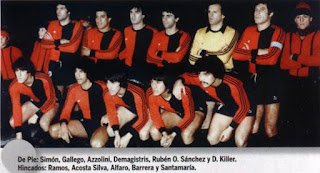 Newell's Old Boys edged River Plate from 3rd place and, to a point, the team did surprisingly well – compared to River Plate, they were nothing as names. Killer was a star, but hardly on the level of Kempes, Alonso, Passarella, and Simon... well, the world had still to wait many years before hearing of him. Third place, but far away from the title – they finished with 39 points. The silver medalists ended with 49.
Two teams competed for the title to the very end of the championship – at the end 1 point separated them. One of the leaders was expected – Boca Juniors. The acquisition of Diego Maradona made them instant favourites. The other team was a big, but pleasant surprise – a team without stars, usually modest and hardly ever making news. 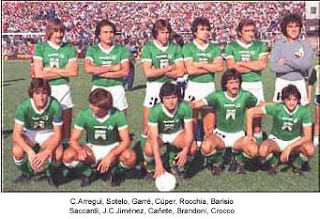 Ferro Carril Oeste, long time First Division members, but one of the smaller clubs in Buenos Aires. And still nothing special, considering the squad – perhaps Garre was their best known player, and he was not exactly first-rate star. Cuper is immediately noticed today, but this is because he became famous coach – Cuper, the player, was not a star. Yet, this largely anonymous and modest squad not only left River Plate far behind, but played as equals with Boca Juniors and Maradona. They even lost fewer matches than Boca and had much better defensive record. Unfortunately, Boca won more more matches then the boys in green and white and they lost the title by a point. Looked like one time wonder, this team, but they were not. 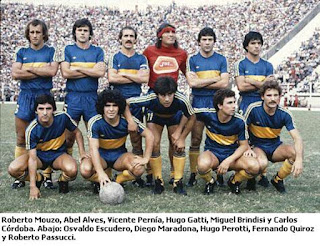 With Diego Maradona now, Boca Juniors must have been formidable team. They were strong before his arrival, having strong run for some time – with him, they had to be almost unbeatable. Everything looked perfect: young Diego was Boca fan and was delighted to see his dream coming true. Hugo Gatti was happy to see Diego on his side instead of scoring him humiliating goals. Diego arrived and Boca immediately won Metropolitano – predictions fulfilled... but it was not an easy victory at all. And considering the rival, Boca Juniors did not seem overwhelming at all. But a title is a title. 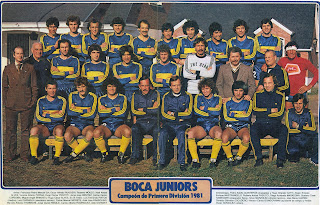 Champions – no matter what, one cannot argue against the fact.
Posted by Vesselin Vesselinov at 12:16 AM 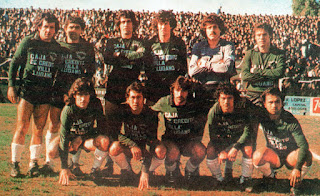 Posted by Vesselin Vesselinov at 12:41 AM 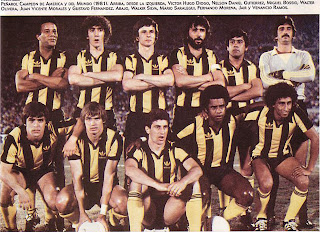 Posted by Vesselin Vesselinov at 4:43 PM 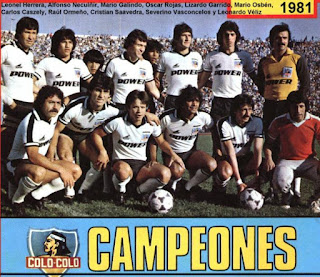 Posted by Vesselin Vesselinov at 12:56 AM