Departing – the other inevitable side of football. Karl-Heinz Schnellinger hung his boots after the end of the Bundesliga season. Another bit of the 1960s stepped down, quite literally with the relegation of his last club. Born in 1939, Schnellinger ammased impressive biography: one of the best central-defenders or libero during the 60s, he somewhat slipped out of attention with the turn of the decade. He was nicknamed ‘Volkswagen’ for his unassuming, dependable kind of game. Never out of form, never flashy, yet he always delivered – and he delivered mostly in Italy. 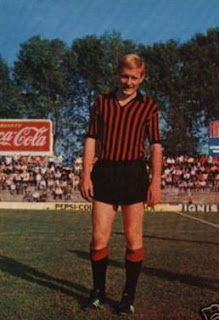 Volkswagen for Milan, where the German spent most of his career.
He started in 1959 with 1. FC Koln and won the West German championship (before the Bundesliga) in 1962. In 1963 he moved to AC Mantova (Italy), but clearly was not to stay in a modest club – AC Roma got him next year and after one-year spell in Rome, he became rosonero and stayed with Milan for almost 10 years (1965-74). And he won a plenty – twice champion (1962 with 1.FC Koln and in 1968 with AC Milan), 4 Italian Cups – AC Roma, 1964 and three with AC Milan (1967, 1972, 1973). In 1969 he won the European Champions Cup with AC Milan, followed immediately by winning the Intercontinental Cup. Add two Cup Winners Cups – 1968 and 1973. That’s on club level.
As a national team player, he was not so successful and it was not his fault really – perhaps he was just unlucky to play between the two greatest generations of West German football – too young to be among the World Champions of 1954 and too old to grace the European Champions of 1972 and the World Champions of 1974. But… he played at fours World Cup finals - 1958, 1962, 1966, and 1970. One of the still few players of such achievement. He played 47 matches for West Germany and scored 1 goal. Getting ready for his last World Cup. The leam starting the friendly against Romania in April, 1970: left to right: Wolfgang Overath, Sepp Maier, Karl-Heinz Schnellinger, Franz Beckenbauer, Wolfganf Weber, Erich Maas, Helmut Haller, Horst Hottges, Gerd Muller, Jurgen Grabowski, Berti Fogts. Kaiser Franz still in midfield – not yet moved to defense, where the Volkswagen reined supreme. The 1970 World Cup was worthy ending for the great player – he scored his first and only goal for the national team against Italy. West Germany eventually lost the match, but the clash is still considered one of the best games ever played. How bitter to lose to a teammate? Schnellinger swapped jerseys with another Milan player – Gianni Rivera. Against each other, Rivera won… but together they still had to win an international cup. Alas, nothing with West Germany – Schnellinger was called for the last time in 1971 – there was iron duo already in place (Beckenbauer and Schwarzenbeck) and there was no more place for Karl-Heinz.
He left AC Milan in 1974 and returned to West Germany, tasting the Bundesliga for the first time. 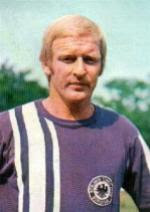 Swan song… Schnellinger joined Tennis Borussia (West Berlin), newcomers to the Bundesliga. Both the club and its new captain were debutantes. TeBe did not have competitive squad and Schnellinger was not able to save the club from relegation alone. Perhaps his last season was bitter… perhaps not: people forget that many superstar played their final seasons in small clubs and lower divisions (Bobby Charlton, for instance). 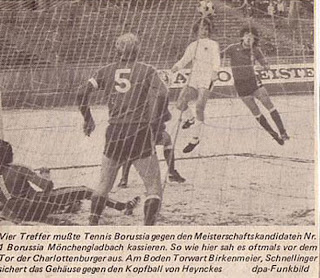 Captaining TeBe against the yet future champions Borussia Moenchengladbach and trying to prevent deadly Jupp Heynckes from scoring. Left of Schnellinger is hopeless goalie Birkenmeier. Difficult last season in the cold both symbolically and literally struggling with the snow. After TeBe went down, Schnellinger retired from football. Didn’t like the snow? May be… Birkenmeier went to play in the USA and Schnellinger returned to Italy and settled as a businessman.
Hats off to the great player – he ended his career modest as ever, as a true Volkswagen. And as a true Volkswagen he captured hearts.
Posted by Vesselin Vesselinov at 7:33 AM